And boy do I have a some split test win’s lined up for you.

This one – I’m certain you’ve never seen before (unless you’re in the supplement millionaire mastermind of course.

Just remember, when you see this split test win pop up everywhere in the next few months…

This is where you first saw it 😉.

But before we get to that, I want to tell you about the #1 disease killing your profits in your business…

(and if you’re a smart marketer, you’ll see how this doesn’t apply to supplements).

The Supplement Disease Killing Your Profits

For those that don’t know, I have a science degree in Biology (BHSc)…

which has given me certain skillsets.

One of those skillsets is identifying diseases.

And In the supplement space, there’s a toxic, widespread disease…

And handicapping your ability to grow.

The ONE bottle buyer.

One Bottle Buyers (OBBs) are notoriously bad for AOVs.

OBBs refund a lot, contribute poorly to the AOV, don’t buy upsells, and complain a lot to customer service.

They’re most likely to unsubscribe from your list as well as report you to spam.

So the typical way to sell supplements is the 1/6/3 model, which looks like the above image.

And a 6 bottle at a steep discount. Smart marketers will also add free shipping and bonuses to 6 bottle options.

The problem though: that doesn’t always work…

Just look in the Clickbank graveyard with the thousands of dead offers.

But even more of an issue: that’s what everyone does.

And if market sophistication tells us anything, it’s that if everyone is doing something, it’s going to need to be innovated on at some point.

Plus it doesn’t solve the big issue: one bottle buyer disease.

So, the question became…

How do we get rid of one bottle buyers, without hurting the rest of the funnel?

As you can see, the price point is the same, the design is identical…

The only difference, the entry to buy is now DOUBLE what it was before.

All the one bottle buyers, begone.

I know ya’ll are curious about the results, so enough foreplay.

Compared to the original funnel of 1/6/3…

The even bottle strategy, based off the hypothesis of eliminating the biggest disease known to supplements: the one bottle buyer…

The even bottle strategy added not $10…

And I know some of you are wondering about the conversion rate.

The conversion rate DID NOT DROP.

Yes, it did not change. Despite essentially doubling the front end barrier to entry.

Look in all transparency, we’ve only run this test on one funnel. Sure it was really good volume, on an 8-figure offer.

But if the results even hold up a bit, it’s going to be the gold standard in the industry in a few months time…

And my bet is that you’ll see this test win everywhere in the next few months.

So best be getting on it sooner rather than later.

Plus there’s a bigger lesson in all of this: when everyone is going one way, go the opposite.

Stop with these little tests that might move the needle.

Go for the big swings, the grand slams, that will either fail, or change the fucking game.

Test it and email me the results: peter@petertzemis.com

P.s. This split test was first shared in my mastermind months ago, then on stage at Brett Fairall’s event GIVE (which was fucking awesome).

If you want to be first in the know (which is half the battle in internet marketing), the best way would be to either hire me for consulting (there’s a 6 month waiting list) or join my supplement millionaire mastermind.

We have over 33 members and companies of all sizes, including doctors, marketers, and entrepreneurs from the ecom space and direct response world. Even better, we have members of all sizes; some are just starting out, and others are doing 9 figures annually.

And no matter where you’re at, the Supplement Millionaire Team, which collectively has done over 120M in sales, can help you grow your team, scale your offers, and maximize your business profits.

You can bring your entire team to each mastermind call, or send individual members to specific calls. 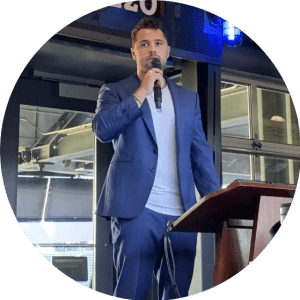 This is the marketing blog of Peter Tzemis. Here you’ll find in-the-trenches internet marketing secrets, entrepreneurship philosophies, and all the best, proven, split test wins (and losses),  to make more sales, convert more customers, and stuff your bank account with A LOT more profits. If you have any questions, or want to contribute, or just want to connect, feel free to hit me up at peter@petertzemis.com